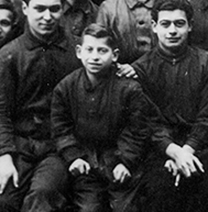 Peter Glück was the son of Erna Bogisch, née Glück (born in Berlin in 1898). He had a sister one year older named Ellen. The two children were born before the mothers marriage and therefore had her maiden name. They were considered "full Jews ("Volljuden). The mothers future husband, Fritz August Bogisch (born in 1898), was not Jewish and had been baptized a Lutheran. This marriage, however, did not protect the children. The family lived at Schopenstehl 1/3 on the fifth floor, and before that at Margaretenstrasse 34, rear house no. 2. In Nov. 1943, Fritz Bogisch moved probably with his wife to Bahrenfelder Strasse 179 on the fifth floor. At this time, the children had already been deported.

Peter Glück had been enrolled in the Talmud Tora School at Easter of 1932 and left school at Easter of 1940 after completing class 8 G. His classmates Walter Golenzer and Martin Beer (see corresponding entries) were also deported and murdered. He was deported along with his sister Ellen to Theresienstadt. Then, on 28 Sept. 1944, Peter was taken on Transport EK to Auschwitz, on 6 Oct. 1944 Ellen on Transport EO also to Auschwitz, where both of them were murdered immediately upon arrival.

The Bogisch couple lived in a "mixed marriage ("Mischehe), as a result of which Erna Bogisch survived, even though she, too, faced deportation to Theresienstadt in early 1945, when the Nazis no longer made any allowances for "mixed marriages. However, she did return from Theresienstadt. Her husband, Fritz August, was a fitter by trade and had worked for the German national railroad as well as the Hamburger "Hochbahn (the Hamburg public transit system). Due to his marriage with a Jewish woman, he was denounced and persecuted. From Oct. 1944 to the end of Apr. 1945, he had to perform forced labor as a "person interrelated to Jews by marriage ("jüdisch Versippter") and was deployed for excavation and clearing work, in the course of which the hard physical labor resulted in health problems. After the war, he worked as a messenger to the extent he was fit for work at all. He died at the age of 57. His widow fought for recognition of his history of persecution as a cause of death, since that would have been important for her pension, but she was unable to prevail with her claim.