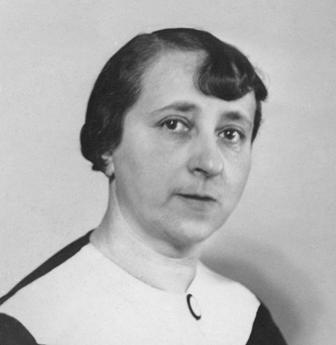 Siegfried Marcus was born on 28 Apr. 1880 in (Hamburg-)Harburg as the son of Julius Marcus and Rosa, née Hirsch. Before World War I, he traded in building materials, afterward working as a representative for advertising materials. In this connection, he also acquired patents of his own for replacement signs. His office was located at Jungfernstieg 2, later on Herrengraben.

Before he moved to Eppendorfer Landstrasse 46 with his family, he lived at various Hamburg addresses, for instance, at Meldorferstrasse 11 and at Löwenstrasse 38.

Siegfried Marcus was married to Friederike Markus, born in Lüneburg as one of eleven children of Wolf and Maria-Anna Markus, née Salomon, on 28 Jan. 1880. She worked in her husbands office. Friederike Marcus died of cancer on 19 Sept. 1941  only about one month prior to the deportation of her husband and two of her sisters.

The Marcus couple had two children: son Kurt Felix, born in Hamburg on 5 Nov. 1914, and daughter Lieselotte, born also in Hamburg on 27 Sept. 1916. After a warning from his mother and the mother of a friend, Kurt Felix fled Germany in 1937, without a visa but provided with a ticket to Britain by his uncle, Hugo Markus. He stayed in the Netherlands at first, then fleeing via Belgium to Paris in 1937, where, assisted by the American Jewish Joint Distribution Committee, he travelled by ship via Marseille to Shanghai. From there, he reached Japan on a visitors visa, working there as the manager of the Kobe Jewish Social Club.

After the end of the war, he worked for the US Army and took up residence in the USA in 1948. There, he married Esther Langsam in 1949. Today Kurt Felix Marcus lives in Israel. Sister Lieselotte also survived the Nazi rule, because she was sent to Britain on a "children transport (Kindertransport) in time. Later, she got married there and had five children. She passed away in 1968.

Siegfried Marcus was deported along with his sisters-in-law, Martha Markus and Emma Hinrichs, née Markus, from Isestrasse 86 (see entries there) to Lodz on 25 Oct. 1941. He likely perished later in Chelmno, where he had been deported further, probably on 15 May 1942.

Martha Markus was a younger sister of his deceased wife and was born on 19 Dec. 1884 in Lüneburg. She remained unmarried and worked as an office employee at Rathausstrasse 4 and, respectively, as an executive secretary in the office of her brothers, Max and Hugo Markus, in the Klopstockhaus at Poststrasse 36. Together with the latter two and the mother, she lived at Kielortallee 16 until the mothers death in 1936, an address where she had already lived in 1930 according to the voters list of the Jewish Community.

In 1940, Max and Hugo Markus emigrated to the USA, which meant that Martha Markus probably lost her job as an executive secretary. In May 1940, she then moved in with her sister and brother-in-law, Friederike and Siegfried Marcus, to Eppendorfer Landstrasse 46. It remains open whether the apartment on Kielortallee was taken from her by force or whether economic reasons compelled her to move. At any rate, she did not make any payments of Jewish religious taxes (Kultussteuer) in the years 1938 to 1941, due to a lack of income.

A postcard that Martha Markus, Emma Hinrichs, and Siegfried Marcus wrote to the sisters Gertrud Simon and Auguste Brassart on the very day of the deportation from the assembly point on Moorweide makes clear that those facing imminent deportation were not aware of what would be in store for them. They asked, for instance, to keep a brown hat for Emma and were concerned that they should have taken along beds and larger suitcases. In the ensuing period, Gertrud Simon helped the relatives in Lodz with money transfers, in this connection using the postal receipts for short messages and encouraging remarks. Probably the last postal money order, returned owing to the functioning Nazi bureaucracy, dates from 1 June 1942, when all three had already been deported further to the Chelmno extermination camp and had likely been murdered by then.

The sisters Gertrud Simon, née Markus, and Auguste Brassart, née Markus, living in "mixed marriages ("Mischehen), were spared deportation for the time being. When mixed marriages were also included in the deportations shortly before the end of the war and they received the order for 14 Feb. 1945 to Theresienstadt, they managed to hide until the end of the war in May 1945. The oldest sister, Christine, however, was deported to Theresienstadt in 1944 after the death of her non-Jewish husband. She survived and returned to Lüneburg an ill woman.

There are no clues that Siegfried, Friederike, or Martha Markus planned, not to mention prepared for emigration, even though two sisters and two brothers of Friederike and Martha did leave Germany because of Nazi rule. Sister Grete emigrated to Sweden, sister Margot Hammerschlag, née Markus, followed with her daughter Steffi (later married name Wittenberg) in late 1939 to join her husband and her son, who had already left the country the previous year, in Uruguay. Even as late as 1940, the brothers Max and Hugo Markus fled to the USA. Martha, who had worked for her brothers and lived with them, remained in Hamburg. While sisters Gertrud, Auguste, and Christine, who lived in mixed marriages, probably believed to be adequately protected by their non-Jewish husbands, we do not know anything about the motives for staying of Martha, Siegfried, and Friederike Marcus, whose children had left the country in time, after all.