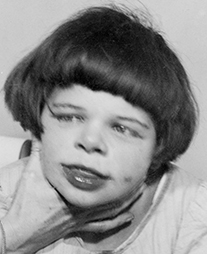 Marga Marie Sophie Bernhardt, born on 14 May 1922 in Hamburg, "transferred from what was then the Alsterdorf Asylum (Alsterdorfer Anstalten) to the "Vienna Municipal Wagner von Jauregg-Heil- und Pflegeanstalt on 16 Aug. 1943, died on 6 Jan. 1944

Marga Bernhardt was born in Hamburg on 14 May 1922. Her parents, the motor vehicle driver Wilhelm Max Bernhardt, born on 8 May 1890 in Kappeln, District of Schleswig, and Martha Juliane Sophie, née Dessaules, born on 31 Aug. 1895 in Hamburg, lived at that time at Mesterkamp 38 in Barmbek-Süd. When they married on 10 Nov. 1915, they both lived at ABC-Strasse 15. In addition to Marga, the marriage produced three children: Wilhelm Walter Ferdinand, born on 15 Dec. 1919, Ingeborg, born on 3 Dec. 1925, and another child who died shortly after birth.

Marga had to endure several hospitalizations during her infancy and toddlerhood, during which she was separated from her parents:

In Nov. 1922, she was admitted to Barmbek General Hospital because a hemangioma on her head was to be surgically removed. At the time, she was suffering from convulsions in which "the body stretches, becomes stiff, and breathing stops.

Her mother reported at Margas admission to what was then the Alsterdorf Asylum (Alsterdorfer Anstalten; today Evangelische Stiftung Alsterdorf) that she had suffered convulsions since birth. The child was artificially fed from the beginning with 2/3 milk and 1/3 oatmeal because she was unable to breastfeed.

In early Jan. 1923, Marga became a patient at Eppendorf General Hospital. She suffered from myxedema, a skin disease triggered by a disorder in the thyroid hormone balance, and inflammation of the nose and throat. On 8 May, about four months later, the child was "discharged as improved.
In Feb./Mar. 1927, Marga was admitted to St. Georg General Hospital for five weeks with a diagnosis of "bronchitis.

Her patient file indicated that she was a "five-year-old child of only 79 cm [approx. 31 in.] in body length. "Only by age 4 [she had been] able to sit. She cannot speak and walk at all yet. Appetite moderate, still takes the bottle. A little later, "The child remains here only for care. Admission to the Alsterdorf Asylum is urgently recommended to the parents. Since this cannot yet take place due to lack of space, the unfortunate being though cannot remain here in view of the other children and the impossibility of the necessary care, she is discharged to her parents again on 23 Mar. [1927] in an unchanged condition.

On 4 Nov. 1927, by which time Marga was five and a half years old, she was admitted to the Alsterdorf Asylum and initially placed in the hospital of the institution "for observation. The observation included "slow development and the following: "Laughs, plays with dolls, friendly. Tongue is shrinking. Unclean.

According to information in her patient file, Marga did not learn to sit in a chair until she was six, to stand with assistance at seven, and to walk without assistance at eleven. Painstakingly acquired progress is said to have been lost repeatedly and would have had to be practiced again.

During the heavy air raids on Hamburg in July/Aug. 1943 ("Operation Gomorrah), the Alsterdorf Asylum also sustained bomb damage. The management of the institution took the opportunity, after consultation with the public health authorities, to transfer some of the residents who were considered to be "weak in labor performance, in need of much care, or particularly difficult to other sanatoriums and nursing homes. On 16 Aug. 1943, a transport with 228 women and girls from Alsterdorf and 72 girls and women from the Langenhorn "sanatorium and nursing home left for the "Am Steinhof sanatorium in Vienna, then the "Vienna Municipal Wagner von Jauregg  Heil- und Pflegeanstalt. Their number also included Marga Bernhardt.

At the end of 1943, the staff at the Vienna institution noted that Marga was suffering from diarrhea. A little later, on 5 January, she was described as "frail, no longer responsive. The following day, 6 January: "Today at 10:15 exit.[us] let.[alis].

In the Viennese "Am Steinhof institution, patients were systematically murdered by overdosing on medication, by not treating illnesses, but above all by depriving them of food. Of the 228 girls and women from Alsterdorf, 196 had died by the end of 1945.

The Vienna institution informed the management of the Alsterdorf Asylum of Marga Bernhardts demise by telegram on 7 Jan. 1944. The parents received no notification. Their address was allegedly unknown.