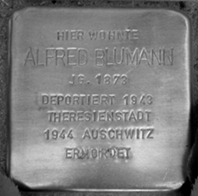 Alfred Blumann was the fourth child of the Jewish painter Ludwig S. Blumann and his wife Bertha Blumann, née Rosenberg. They had first lived in Tostedt, where their two sons Bernhard Blumann was born on October 21, 1858 and Martin Blumann on September 23, 1860. Later the family had moved to Harburg, where the third child, Regina Blumann, was born on August 27, 1869. Her younger sister Helena saw the light of day on September 6, 1874. Her life was short. She died nine months after her birth on June 11, 1875 and was buried in the Jewish Cemetery in Harburg.

Unfortunately, little is known about Alfred Blumann's further life. Professionally, he worked as a merchant. When and where he met and married his wife Meta, née Rewald, (born Febr. 1, 1882) from Greifenberg in Pomerania, has not yet been clarified. It is also unclear when their daughter Ursula was born and whether she had other siblings.

Sixty-one-year-old Meta Blumann was among the 1750 Jewish men, women and children from Paderborn, Bielefeld, Hanover and Berlin who arrived at the Auschwitz-Birkenau death camp on March 4, 1943. After selection, 517 men and 200 women were admitted to the camp. The remaining 1033 people from this transport were killed immediately in the gas chambers.

A memorial leaf deposited by her daughter Ursula Weiss at Yad Vashem on July 15, 1955, commemorates her violent death in this largest German extermination camp.

14 days later, on March 17, 1943, at the age of 69, Alfred Blumann was deported to Theresienstadt with the last large transport of 1342 people from Berlin. Here, at the latest, he must have realized that the National Socialist propaganda of Theresienstadt as a well-deserved retirement home for Jews was one big lie. Before they were deported, all those who still had any remaining assets had to transfer them to the German Reich in so-called home purchase contracts. In return, they were promised adequate housing, varied food and good medical care. The opposite was the case. The accommodations, with their three-story bunk beds, were constantly crowded. There was no thought of privacy in these mass quarters. In view of the completely inadequate rations and the poor medical care, hunger and disease were omnipresent in the ghetto.

Even more unbearable was the residents' constant fear of the non-stop deportations to the East, although - or precisely because - there was a lack of more precise information about these displacements. More than 88,000 people were affected. For most of them it was the last part of their journey to death.

On May 18, 1944, Alfred Blumann was also forced to leave the Theresienstadt ghetto with 2,498 men, women and children for the East. The transport reached the concentration and extermination camp Auschwitz one day later. Here ended the life of this native of Harburg. The exact circumstances of his death are unknown to this day.