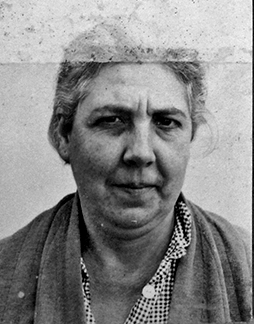 Bertha Feld, daughter of Jewish parents, born on 25 Aug. 1885, gave information about herself at the age of 57: Her father, the school janitor Aron Feld, had died six weeks, her mother Rosalie, née David, three months after her birth. According to her own information, she was often beaten by a stepsister. As a small child, she had to get up at four oclock in the morning to work. She had been bed wetter until she was five or six years old. At the age of six, she started the eight-grade elementary school (Volksschule), attending it up to the first grade (at that time, the first was the highest grade). She did not remember any particular penchants at school. She described herself as a very funny and friendly person, despite everything, not quarrelsome, not agitated. After finishing school, she entered business and earned well with her own stall. She said she had remained unmarried. She did not wish to give any information about her own children or pregnancies.

Obviously, Bertha Feld had mastered her life quite well, although since her childhood she had suffered from choking fits due to a goiter, an enlargement of the thyroid gland due to iodine deficiency, which was surgically removed in 1931. Since that time, Bertha Feld had seizures, which she herself did not notice, however. From acquaintances, she learned that such seizures had led to falls and unconsciousness. When Bertha Feld was admitted to Eppendorf Hospital in 1933, she complained that her memory had recently been blacking out and that she had therefore often been unable to complete activities already begun.

The neurologist Dr. Leopold Koppel referred Bertha Feld to the Friedrichsberg State Hospital (Staatskrankenanstalt Friedrichsberg) in Sept. 1933. At that time, she lived at Blumenau 163 in Hamburg-Eilbek. In Friedrichsberg, she was admitted to the open neurological department. Apparently, the doctors there were unable to help Bertha Feld. They noted in their patient file, "Since Pat.[ient] comes up again and again with new complaints and allegedly no improvement in her condition has occurred, she is advised to be discharged. This took place on 9 Oct. 1933.

In Apr. 1934, the Hamburg District Court (Amtsgericht) sentenced Bertha Feld to three days imprisonment, which she had to serve immediately after sentencing. No record has been passed down concerning the alleged offense. In her prisoners file card, Wandsbeker Chaussee 116 with Siemers is noted as her address.

In Feb./Mar. 1936, Bertha Feld was again a patient at the Friedrichsberg State Hospital. Her address at that time was Lübecker Strasse 116 with Wendt. Even this hospital stay did not lead to a clarification of the cause of the disease. She was indirectly alleged to simulate her illness. On the occasion of her discharge on 3 Mar. 1936, the following was noted in the patient file: "Pat.[ient] does not let on anything, bids the doctor farewell in a friendly and [...] obliging manner.

After stays in the Farmsen care home (Versorgungsheim) and again in the Friedrichsberg State Hospital, Bertha Feld was admitted to the Langenhorn State Hospital (Staatskrankenanstalt Langenhorn) in Dec. 1937, by that time with the diagnosis of "state of agitation and violence. Half a year later, on 9 May 1938, she was transferred to the Lübeck-Strecknitz "sanatorium (Heilanstalt). She remained there until 16 Sept. 1940.

In the spring/summer of 1940, the "euthanasia headquarters in Berlin, located at Tiergartenstrasse 4, planned a special operation aimed against Jews in public and private sanatoriums and nursing homes. It had the Jewish persons living in the institutions registered and moved together in what were officially so-called collection institutions. The Hamburg-Langenhorn "sanatorium and nursing home ("Heil- und Pflegeanstalt Hamburg-Langenhorn) was designated the North German collection institution. All institutions in Hamburg, Schleswig-Holstein, and Mecklenburg were ordered to move the Jews living in their facilities there by 18 Sept. 1940.

Bertha Feld arrived in Langenhorn on 16 Sept. 1940. On 23 Sept. 1940, she was transported to Brandenburg/Havel with a further 135 patients from North German institutions. The transport reached the city in the Mark (March) on the same day. In the part of the former penitentiary that had been converted into a gas-killing facility, the patients were immediately driven into the gas chamber and murdered using carbon monoxide. Only Ilse Herta Zachmann escaped this fate at first (see corresponding entry).

None of Bertha Felds records show that she had relatives. We therefore do not know whether and, if so, when relatives became aware of Bertha Felds death. In all documented death notices, it was claimed that the person concerned had died in Chelm (Polish) or Cholm (German), a town east of Lublin. Those murdered in Brandenburg, however, were never in this place. The former Polish sanatorium there no longer existed after SS units had murdered almost all patients on 12 Jan. 1940. Also, there was no German records office in Chelm/Cholm. Its fabrication and the use of postdated dates of death served to disguise the killing operation and at the same time enabled the authorities to claim higher care expenses for periods extended accordingly.