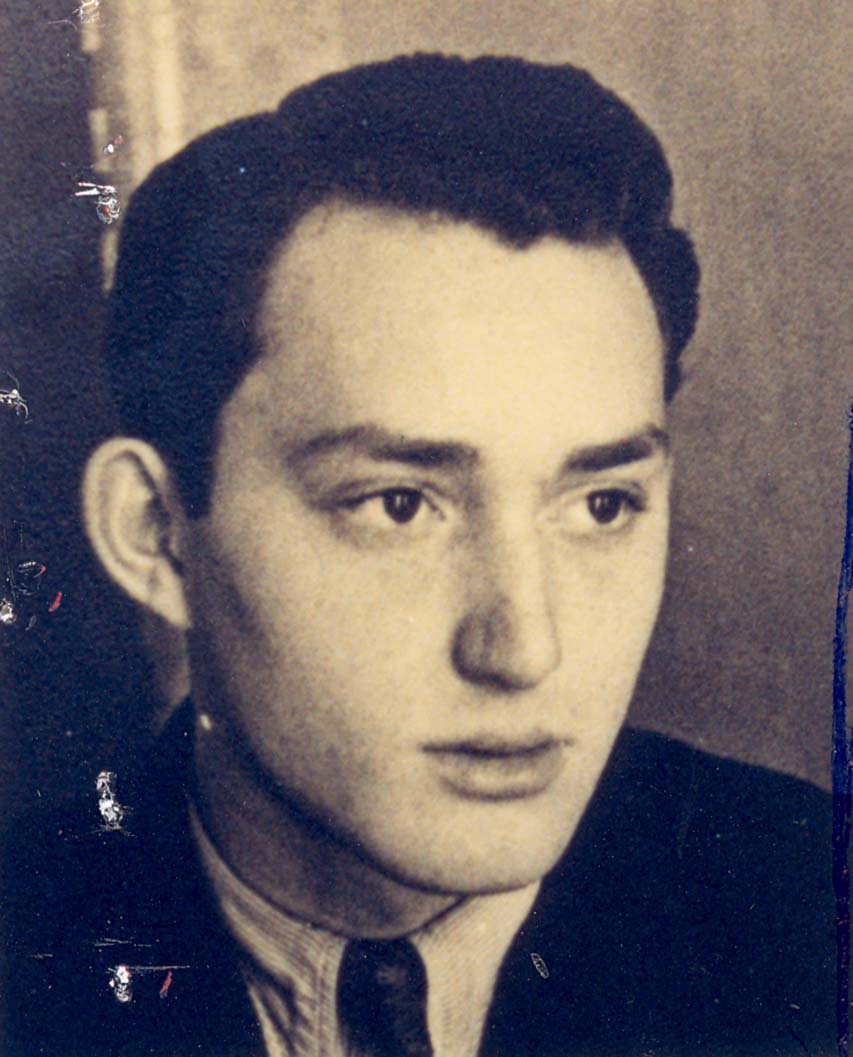 Walter Golenzer, born on 12 July 1925 in Hamburg, deported on 5 May 1943 to Theresienstadt, and via Auschwitz and Dachau to the Flossenbürg concentration camp; died there probably on 5 Mar. 1945

Walter Golenzer was only 19 years old when he died in the Flossenbürg concentration camp two months before the end of the war. He was stateless and, according to the National Socialist definition, a "half-Jew ("Halbjude) or "person considered to be a Jew ("Geltungsjude). The Jewish father, Hermann (Chaim) Golenzer, was a restaurant owner by occupation. Born on 25 May 1902, he had been living in Hamburg permanently since 1919. The mother, Elsa (Esther) Golenzer, née Meier (born on 11 May 1901, died on 28 June 1962) was of non-Jewish descent. Both parents were stateless.

Walter had a sister, Ruth, who was almost three years older, and a brother, Michael (Meschel), who was 14 years younger. His parents and siblings survived.

Until 1942, the family had lived in Eimsbüttel at Sillemstrasse 3 on the fourth floor. Probably in 1940, the family took in the young woman and mother Ruth Drucker as a subtenant, who was deported from this address to Minsk in Nov. 1941 (see Stolpersteine in Hamburg-Altona, p. 39ff.). In 1942, the Golenzers moved to Rappstrasse 13 and a little later to the former Kalker Stift, a residential home and subsequent "Jews house ("Judenhaus) at Rutschbahn 25a, where the family still lived after 1945.

Walter Golenzer was enrolled in the Talmud Tora School at Easter of 1932. At Easter of 1940, he left the school after completing his years in the eight-grade elementary school (Volksschule). Martin Beer and Peter Glück, also commemorated by Stolpersteine in Eimsbüttel, were his classmates, as were Schlomo Schwarzschild and Karl-Heinz Silberberg, who succeeded in emigrating, as well as Günther Nachum, who is remembered by a Stolperstein at Grindelhof 29. The homeroom teacher of the G 8 graduating class was Ernst Streim, who lived at Grindelallee 184 and was deported and murdered like his students.

Walters sister Ruth attended the Jewish school for girls, the Israelite Girls School on Carolinenstrasse, from Easter of 1929 to Easter of 1937.

From Dec. 1938 onward, Walter Golenzer wrote several postcards to his friend Karl-Heinz Silberberg, who had managed to depart for Britain at the end of 1938 and lived in Claydon near Ipswich in Mar. 1939, before emigrating to join his father in Uruguay. Possibly, Walter and Karl-Heinz were intended to depart for Britain together because Karl-Heinz father inquired with his son in Britain whether he was together with Walter Golenzer. On 21 Dec. 1938, Walter wrote to Karl-Heinz: "Perhaps Ill come to join you soon, but then, on 5 Mar. 1939, the correspondence read, "From Hamburg, no more children are going to England and Holland. Why, I do not know  And on 20 Apr. he wrote, " Did you hear the news that the girls have joined us? In most classes, boys and girls are together, but not in ours. My bike is broken at the moment. Lately, I have hardly been reading any Karl May volumes anymore. This year we have Levy as a homeroom teacher. The Tennispark Hoheluft now accommodates the Viktoria [tennis club]. Unfortunately, I can no longer play tennis there. Recently, we got mail from the Community concerning the children transport [Kinderverschickung].

The remark about the girls referred to the fact that the Jewish boys school had to be merged with the girls school at this time.

Walter was no longer able to do an apprenticeship after his schooling, because from Nov. 1941 onward, he had to perform forced labor at the Lokstedt-based Steen & Co spinning mill, where his father was also a forced laborer since Feb. 1940. On 5 May 1943, Walter was deported to Theresienstadt. Since he was a "half-Jew ("Halbjude), he had not been taken on the first large-scale transports to Lodz, Minsk, or Riga; however, ultimately he was unable to evade the deportation order. He did not live to see the liberation. He was deported along with his sister Ruth and her husband Ewald Wolf (born on 19 July 1907 in Gelsenkirchen) from Rutschbahn 25a to Theresienstadt. From there, he was sent to Auschwitz in Sept. 1944, like many thousand others. He was probably classified as fit for work and therefore he was not killed immediately but instead forcibly taken to Dachau. On 7 Jan. 1945, he was transferred from the Kaufering external camp of the Dachau concentration camp to the Leitmeritz external camp of the Flossenbürg concentration camp and registered under prisoner number 42,658 as a "Jew, stateless ("Jude, staatenlos). On 28 Feb. 1945, he was transferred from the Leitmeritz external camp to the Flossenbürg concentration camp. In the Memorial Book [of the German Federal Archives], his date of death is indicated as 5 Mar. 1945. This date also appears on the Pages of Testimony at Yad Vashem filled out by his sister. The archive of the Flossenbürg concentration camp revealed no clue as to his date of death. His sister was also sent to Auschwitz. She survived.

The father, Chaim Golenzer, became involved after 1945 in rebuilding the Jewish Community. The siblings, Ruth and Michael, later operated a bagel restaurant in Chicago together with Ruths husband. Ruth Golenzer died in the summer of 2008. The parents, too, emigrated to the USA in 1951.