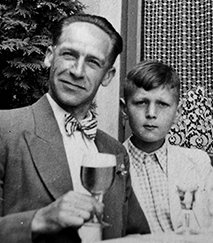 Heinrich Christoph Ferdinand Schröder, born on 9.12.1896 in Lüneburg, imprisoned on 15.12.1944 for "preparation for high treason" in the Fuhlsbüttel police prison, transferred to Neuengamme concentration camp on 20.4.1945 and murdered there between 22 and 24 April

A few days before the wars end, on April 20, 1945, 58 men and 13 women were taken from Fuhlsbüttel police prison to Neuengamme concentration camp. They were so-called "protective custody prisoners of the Gestapo and had been placed, without any judicial proceedings, on a "list of incorrigible, highly dangerous elements to be eliminated without fail," the "liquidation list." All 71 persons were murdered in the camp's detention bunker during the nights of April 22 to April 24: strangled, shot, blown to pieces by hand grenades, beaten to death. (For more, see www.stolpersteine-hamburg.de: Glossary, Neuengamme Concentration Camp: The Murder of 71 "Protective Prisoners"; ibid: Documentaries/Downloads, The Last Dead of Neuengamme.)

Among those murdered was Heinrich Schröder. He came from Lüneburg. He was born there on December 9, 1896. His father was Johann Heinrich Gustav Schröder, his mother Emma Elisabeth Katharina Amalie Schröder, née Meier. The father was a cooper by trade, belonged to the Social Democrats (SPD) as a member and held an official position in the local association until the National Socialists took power in the state in 1933 and banned the SPD. Son Heinrich Jr. also belonged to the SPD.

After attending secondary school, Heinrich Schröder had learned the painter's trade from 1911 with master painter Zicker in Lüneburg and graduated with a journeyman's certificate in April 1915. After an interruption due to service in the army during World War I, which he survived unscathed, Heinrich continued his professional career: until 1930 as a foreman in the Marquard painting business in Lüneburg, and from 1931 as an independent contractor near Lüneburg, first in Vastorf, then in Bienenbüttel. At the same time, he continued his education in painting company and advertising signs.

He discovered his artistic vein and from then on used his free time to paint, especially watercolors. In 1937, after harassment of the former Social Democrat by local Nazis, Heinrich Schröder left the region and moved to Hamburg. He had found employment as a manager at the respected painting company Otto Hinrichs in Othmarschen. He was paid, as the company later confirmed on oath, the respectable monthly salary for those years of 450 to 500 RM.

He was now 40 years old, living at Rüsterkamp 39, a quiet and friendly little street with rows of one- and two-family houses owned by the Hamburg housing association SAGA in the Bahrenfeld district. Meanwhile, he had met Sophie Westphal, née Maubach, born on November 7, 1900 in Friesdorf in the Rhineland, divorced for two years, a hairdresser by profession. From her marriage she had a son, Gerd Westphal, born on Dec 2, 1928. When Heinrich and Sophie married on May 31, 1939, he was 43 years old, she 38, Gerd ten and a half. As friends and Heinrich's surviving relatives point out, Heinrich accepted the child as his own; they had a warm relationship. This good atmosphere can also be felt in the photos in which the two can be seen together. In 1942, the small family moved into a somewhat larger apartment, at Hornackredder 2, 2nd floor on the right, another SAGA residential street, in Hamburg-Eidelstedt.

But work and family life did not remain undisturbed: on September 1, 1940, Heinrich Schröder was drafted into the Security Assistance Service (SHD) of the Air Raid Police and assigned to the 3rd Replacement Company of Replacement Battalion 469 in Lübeck. Ordered back to Hamburg in August of the following year, he came to the SDH office in Othmarschen, Parkstraße 47, located near his former workplace in Waitzstraße at Maler Hinrichs.

At his office, Heinrich Schröder was arrested on Dec 15, 1944, by Hamburg Gestapo men Criminal Secretary Henry Helms (*1902) from Department IV A "Communism and Marxism," Section IV A 1 "Communism," and his aide Ernst Lietzow (*1917) and taken for interrogation to Gestapo headquarters behind the Civil Justice Building on the Wallanlagen, declared a "protective custody prisoner" and sent to Fuhlsbüttel police prison.

Gestapo documents on this matter have not been preserved; they were destroyed shortly before the end of the war. The Hamburg police, however, kept a personnel file on the air-raid police officer Heinrich Schröder, who was obliged to serve, with the note: "Was arrested for listening to enemy radio stations and suspicion of anti-state activity." Dated February 13, 1945, it adds: "Notification from the Gestapo: heavily charged with explosives matters, must remain in prison."

This arrest was a severe blow not only to Heinrich Schröder and his family, but also to the Hamburg resistance movement, because Heinrich belonged to the closest leadership circle of the group "Kampf dem Faschismus," (fight against Faschism) abbreviated KdF. The abbreviation corresponded to that of the Nazi recreational organization "Kraft durch Freude" (Strength through Joy) and was intended to serve conspiratorial communication. The leader of the group, Karl Martin Schultz (born May 3, 1898 in Hamburg) and Schröder had known each other since childhood. Both had grown up in Lüneburg, had gone to school together and had completed their apprenticeships there, one as a painter, the other as a locksmith.

Little is known about KdF, because the group did not have a formulated program, and written documents were destroyed for security reasons at the end of 1944. Several of the employees and their relatives were murdered (such as Rudolf Ladewig, his son Rudolf, his daughter Annemarie, and his partner Elisabeth Rosenkranz, see their biographies in www.stolpersteine-hamburg.de). Arthur Schulze (*1897) from Altona died in May 1945 as a result of the mistreatment.

KdF saw itself as a non-partisan association of bourgeois liberal and anti-fascist forces from all parts of the population and, having grown slowly during the war, had gained a good foothold in Hamburg around 1944, including in some industrial enterprises. The conspiratorial meeting places included Harry Breckenfelder's antiquarian bookshop at Gerhofstraße 5 and Berthold Neidhardt's "Fundgrube für Bücherfreunde" on Dammtordamm.

Among the acute tasks were the support of forced laborers, of racially and politically persecuted persons, the dissemination of information. The main goals, however, were to hasten the collapse of Nazi rule, to prepare for the time of overthrow, and to build a democratic Germany cleansed of National Socialism. The plans also included sabotage actions and attacks on Nazi institutions, including with weapons and explosives.

Several testimonies, including that of the Gestapo man Helms, confirm that Heinrich Schröder, together with Karl Schultz and Arthur Schulze from Altona, played an important role in the group and urged active resistance. It is probably true that he was responsible for the procurement and storage of explosive material that was to be used against military defenses such as tank traps or barricades in the last days of the war. As Karl Schultz testified in March 1948 in connection with the trial of Hamburg Gestapo men, there is even said to have been a plan to blow up the high-rise bunker in Eiffestraße when safe quarters were to be created there for Nazi party leaders in 1944.

What is certain is that, like a whole series of people from the Hamburg resistance, KdF fell victim to Gestapo agent Alfons Pannek (born 1907). Pannek, a former Communist and Spain fighter, had been turned by the Gestapo by force and coercion and had become a highly cunning and obsessive persecutor of Nazi opponents. With the help of his reading circle on Wendloher Strasse in Eppendorf, a seemingly safe place for an open word, he also managed to inspire confidence in the KdF.

Heinrich Schröder, of all people, was deceived by Pannek's anti-fascist slogans and his tales of alleged connections to wider anti-fascist circles. After months of probing, Schröder introduced him to Karl Schultz in 1943/44. Pannek knew how to make an impression here as well: He procured - in consultation with his clients, of course, the Gestapo - special taps for the production of explosive casings, for example. He even went so far as to design and then issue membership cards for the KdF leaders. He is also said to have come up with the idea of the name "Kampf dem Faschismus" (KdF).

Schröder was the first of the group to be arrested on Dec 15, 1944. As Henry Helms testified in his interrogation before the Regional Court on July 29, 1947, "Schröder's arrest was taken prematurely, since this man with his plans appeared to be very dangerous." The secretary in Helms' office, Helene Reimers (*1913), and the stenographer Ursula Prüssmann (*1925) unanimously testified in the interrogations in the criminal proceedings against Helms and others in 1945 and 1946, respectively, that Schröder had been abused by Helms and his assistant Lietzow during the interrogation with punches to the face and kicks. The main objective was to obtain information about the group's relations in other cities and abroad. However, this was not successful.

A few days later, on Dec 28, 1944, Schröder's wife Sophie and stepson Gerd Westphal were also arrested. Sophie later stated that Helms had threatened her with consequences during the search of the apartment if she informed others of Heinrich's arrest. However, she had informed Schultz. Gerd later gave as the reason for his arrest that he had been a courier between Schröder and the meeting in the bookstore on Gerhofstraße, and that this had probably become known to the Gestapo.

Sophie and Gerd were taken separately to the Fuhlsbüttel police prison. Gerd, who had just turned 16, suffered particularly. Not only did he not know anything about the whereabouts of his parents, he was also put in solitary confinement. He spent the first night naked for hours on the cement floor in an ice-cold cell in the basement - it was late December! - his clothes had been removed for delousing. He was taken to shower, but, still without clothes, was not given a towel to dry off. Then, put into the solitary cell, which was also unheated, there was nothing to eat and hardly anything to drink for the first three days. As Gerd later testified, he suffered several nervous attacks from fear and despair in prison, as he described his breakdowns.

After more than three months, on April 7, 1945, mother and son were released. They knew nothing of the husband or father. They learned the truth only in 1946 from the Committee of Former Political Prisoners.

Gerd never really recovered from the mental and physical torture. In addition to loss of appetite, sweating, and persistent underweight, in 1946 there was a rapidly developing "productive pulmonary tuberculosis." It was officially diagnosed in Hamburg's Wintermoor Hospital as a probable consequence of the prison conditions in the freezing winter of 1944/45 in Fuhlsbüttel.

Although he was temporarily forbidden to do any work and was prescribed strict recumbency cures, Gerd persevered with energy in his apprenticeship as a halftone photographer at the Bauer und Söhne cliché factory and passed his journeyman's examination with the best results in April 1947. But illness progressed and "the talented young man with above-average achievements in the field of photography," as the company confirmed in writing, had to give up the physically demanding job of halftone photographer in 1951. In 1957, another disease, now fatal, was added to the list: a very malignant form of leukemia.

Gerd Westphal, the adopted son of Heinrich Schröder, was also a victim of Nazi crimes.

Sophie Schröder died, after years of fighting with the authorities for adequate reparations and widow's pension, in poor circumstances on July 12, 1985.

Karl Schultz, who as head of the "KdF" was also on the liquidation list, survived in the Kiel-Hassee labor "education camp (Arbeitserzieungslager): Henry Helms had imprisoned him in Fuhlsbüttel under the pseudonym "protective prisoner Walter Schüler" for "investigative tactical considerations" and in the end lost track of his actions.