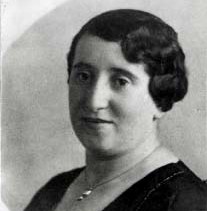 Eva Hava was born in the city of Norden in East Frisia, the daughter of Moses Joseph and Georgine von der Wall, née Wolff. She married Schlomo Walden, called Salo, who was born on 9 March 1886 in Stanislau (Poland), the son of Meyer Moses and Taube Walden. At the end he worked in a mens haberdashery and travel luggage shop on Hütten Strasse in Hamburgs inner city; it is possible that he also owned the business. Aside from the financial difficulties of the early 1930s, the family was well-situated and paid taxes as members of the Jewish Congregation until their deportation.

In the Third Reich, they had to adopt the names "Sara" und "Israel" and wear the "Jewish Star as of September 1941. Eva, her husband Salo, and her sister Else were among the first to be deported from Hamburg to Lodz. On 25 October 1941, toward 10 am, they embarked with their companions in suffering on a trip from the Hannover Railroad Station to occupied Poland. In Lodz, Eva was lodged at Alexanderhofstrasse 15, dwelling 12 and later at Sperling Gasse 12, dwelling 12. She was assigned to work in the ghetto. Her husband Salo was also at Alexanderhofsstrasse 15, but in dwelling 22. What work he did there is not known; his arrival card noted the old occupational designation of "businessman. These are the last known documents that exist for Eva and Salo. At wars end they were classified as missing. On 8 May 1945, they were declared dead.

Their children escaped this fate through emigration: Manfred left for South America; Gerda went to Sweden, Meno to Lithuania, and Thea was able, at 19 years of age, presumably in March 1939, to flee to England. In the 1960s, all the children lived in New York City and began families. In 1962, they each received the customary compensation for murdered parents, DM 5 ( 2.50) per day in the ghetto, calculated up to the end of the war.

Today, in addition to a memorial stone at Grindelallee 116, a brass plaque commemorating the Holocaust has Eva Hava Waldens name inscribed on it in her Norden hometown.