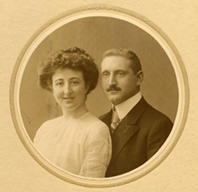 Käthe and Adolf Maass both came from Jewish families. Käthe Elsbach was the daughter of a linen manufacturer. They were married in 1911 and had three children: Herbert (later, Edward Arthur Marsden, born on 14 Mar. 1912), Lisa (married name Maasse, born on 7 Dec. 1916), and Gerhard Adolf (born on 16 July 1918).

After passing his high-school graduating exam (Abitur), Adolf Maass became an apprentice in the Bremen head office of the Kühne and Nagel shipping company, founded in 1890. After a mere year and a half, he was able to finish his apprenticeship and was entrusted with a department of his own. In 1902, the company founder August Kühne sent him to Hamburg to establish a branch. With fervent ambition, great skill and success, he devoted himself to this task, and in 1910, he became a partner in the firm. In 1928, a share of 45 percent of the Hamburg branch of Kühne & Nagel was assigned to him by contractual agreement. The company founder passed away in 1932, and his sons Alfred and Werner took over the business, with Alfred heading the Hamburg branch and his brother staying in the parent company in Bremen. Also in 1932, a conflict arose between the brothers Alfred and Werner Kühne and Adolf Maass. In the aftermath, Maass left the company without any severance payment in Apr. 1933. To what extent political reasons may have played a role as well remains unclear. In a publication commemorating the 75th anniversary of the founding of Kühne & Nagel, the work of Adolf Maass was definitely acknowledged with appreciation. Regarding his retirement from the company, the text then reads, "In Apr. 1933, Adolf Maass leaves in order to join as a partner a wholesale trade business owned by relatives. Alfred and Werner Kühne manage the company as sole owners. Werner Kühne became a Nazi party member on 1 May 1933. In the 1940s, the Kühne & Nagel Company profited substantially from transporting from all of Europe so-called "Jews goods, i.e., the household effects of deported Jews that the Nazi state had appropriated.
Adolf Maass joined the Lipmann & Co importing firm, receiving a managing position there. In this company, too, an "Aryan partner tried to bring the enterprise under his control in 1935. The year 1936 saw the division of the company and the loss of the import quotas. Finally, in 1938, the enterprise was liquidated. In 1938, Adolf Maass was forced to give up his position on the supervisory board of Elsbach AG in Herford, which had been founded by his father-in-law.

At the same time, the plundering of the well-to-do family through Nazi legislation began: The assets were blocked and the "levy on Jewish assets ("Judenvermögensabgabe) set at 35,000 RM (reichsmark). Royalties from oil production near Celle, to which the family was entitled, had to be paid over directly to an account controlled by the Hamburg Chief Finance Administrator (Oberfinanzpräsident).

After the Pogrom of November 1938, Adolf Maass was arrested and spent several weeks in the Sachsenhausen concentration camp. The emigration plans the couple considered in the aftermath were shattered by the Second World War. In the summer of 1941, they were forced to sell their lavishly furnished house on Blumenstrasse below value, with the proceeds going to a blocked account as well. In some way, they managed to evade the transport on 25 Oct. 1941 to Lodz: Their names on the deportation list were crossed out by hand. However, at the end of 1941, they were relocated by force to the "Jews house ("Judenhaus) at Bogenstrasse 25. On 15 July 1942, they then complied with the deportation order to Theresienstadt.

A few days later (transport from Hamburg on 19 July 1942), Adolfs sisters Bertha (born on 27 Mar. 1874 in Borgholzhausen) and Emma Goldberg (born on 9 Apr. 1877 in Borgholzhausen) as well as Emmas husband, the merchant Hugo Goldberg (born on 17 Dec. 1875 in Arnsberg/Westphalia) also arrived there. Bertha, listed on the tax file card of the Jewish Community as a "vocational counselor and "not having any creed, had lived at Schenckendorfstrasse 1. Before her deportation, she had to endure a special form of harassment, which resulted in a criminal file being started on her. On 12 June 1942, she wrote to the supervisory authority of the Gestapo: "The Hamburg Jewish Community [] demanded from me that I terminate my apartment and vacate it within a few days. I would like to implore the supervisory authority of the Gestapo to kindly permit me to continue staying in the room that I occupy. I have resided in this room for nearly 28 years, sharing the additional small rooms with one lady for 12 years, with the other for eleven years. At my age, I have a number of ailments, which render leaving my familiar surroundings in the brief time of my life still left doubly difficult. Since December, I have been confined to my apartment. Enclosed, please find the medical certificates [] The reaction to this letter was a visit by SS officer Vogeler and Kriminalsekretär [a rank equivalent to detective sergeant or master sergeant] Botz. They determined that the "Jews star (Judenstern) was missing next to the nameplate, then searched the apartment, finding a few pieces of silver cutlery which Jews were banned from possessing by that time. Bertha Maass was arrested and transferred to the pretrial detention facility. On 7 July 1942, she was sentenced by order of summary punishment to two months in prison. Thereupon, her brother-in-law, Hugo Goldberg, went to the Gestapo and managed to get her released from prison and deported along with other family members to Theresienstadt on 19 July 1942. As early as 26 Sept. 1942, she was transported from there to Treblinka and murdered. Before the deportation, the Goldberg couple was quartered in the "Jews house at Ostmarkstrasse 24 (today: Hallerstrasse) in the very end. Hugo Goldberg died on 3 Nov. 1943 in Theresienstadt, his wife Emma was taken to Auschwitz on 15 May 1944 and murdered there.

On the same transport, Adolf and Käthe Maass also ended up in Auschwitz and were murdered there, probably immediately upon arrival.

The couples children had managed to emigrate in time with the help of their parents, thus surviving the persecution: Herbert Maass passed his high school graduation exam (Abitur) at the Johanneum High School in 1930 and studied law in Hamburg up to his second state examination [qualifying him to start as a legal trainee] in 1933. He was denied, however, the appointment to legal intern, but he did still manage to obtain his doctorate in law in 1934. That same year, he emigrated to Britain. After the outbreak of war, he was interned there as an "enemy alien on the Isle of Man, later in Australia. In the 1940s, he was offered to join the British Army. In order to protect him and his family in case he was captured by the Germans, the authorities suggested that he change his name, and he chose Edward Arthur Marsden as a name. Under this name, he was first deployed in India. In 1947, he was able to return to the country of his childhood as a member of the Allied Control Commission for Germany. He took up residence in Herford and worked as a jurist at a restitution court.

Daughter Lisa finished her school days at the Firgau School at Sierichstrasse 53 in Mar. 1933. She began training as an infant nurse but she was not allowed to complete a qualification in Germany any more. She passed the relevant exam in Britain in 1936. In 1937, she returned to Hamburg one more time to undergo dental treatment. When entering Germany, her passport was seized. She received the passport back only when emigrating to New York in Dec. 1938.

Gerhard Maass left the Heinrich-Hertz Realgymnasium on Vossberg without taking his high school graduation exam in 1936 and started a commercial apprenticeship. After a stopover in Stockholm, he emigrated to Canada in 1938.