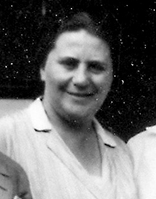 Hennys later husband, the merchant Julius Schwabe, was born in Jever on 29 May 1883, the son of watchmaker Adam Isaak Schwabe (18611903) and his wife Clara, née Israel (born in 1868 in Nakel/Prussia  now Naklo nad Notecia/Kuyavian-Pomeranian Voivodeship/Poland), who had developed over the centuries into a center of Jewish life.

The first evidence of a Jewish settlement was documented for 1698, when the town belonged to the small principality of Anhalt-Zerbst on the Elbe River. In 1802, the Jewish Community dedicated the newly built synagogue. In 1855, 125 Jewish inhabitants lived in the city and in 1890, there were 219, so that a new synagogue was built and dedicated in 1880. In the same year, right next door, the religious school opened.

Henny and Julius Schwabe both came from long-established families in Jever. They spent their childhood there, went to school, got to know and love each other. They were married on 1 Sept. 1911. No children were born in this marriage. Julius Schwabe was called "Uncle Ju in the family. He was considered an artistic and poetic person. At the same time, he enthusiastically played games of skat, which the Schwabe and Josephs couples often arranged, as the grandson of Elise Joseph, Gideon Schmuel de Beer and his family, told us.

Julius Schwabe was a successful shoe retailer in Jever for many years. The town was considered liberal, but national conservative slogans were already heard in the 1920s. Julius Schwabe had been a member of "Albani-Pütt for several years. "Pütts dated back to a time when residents and business people joined forces in their district to protect "their drinking water wells, a tradition that lived on and was celebrated. However, from 1933 onward, this life no longer existed. The Sparkasse (savings bank) Director was no longer available for contact, the two bank clerks no longer greeted him, and three other Pütt members became involved in the NSDAP, the Nazi party. The boycott of the Jews on 1 Apr. 1933 was also likely to have affected Julius Schwabes business. This meant that the Jews had less income and eventually had to sell their property, businesses, and houses far below value. Long-standing customers who wanted to continue shopping there were photographed and publicly shamed. The Jews of Jever were expelled from their homeland as early as the mid-1930s, many of them settling in the major northern German cities. The National Socialists wanted to "clean up Jever as quickly as possible.

The Schwabe couple moved to Hamburg. On 20 Apr. 1937, the Jewish Community registered them as members. From 1 Apr. 1937 to 15 Apr. 1938, the couple lived at Heinrich-Barth-Strasse 3, where, according to the Hamburg directory of 1938, Julius Schwabe traded with office supplies until 31 Dec. 1938, when Jewish businesses had to be "Aryanized or liquidated, depending on how a commission of civil servants and merchants decided. Julius Schwabes business was liquidated. From mid-Apr. 1938 onward, Henny and Julius Schwabe found accommodation with the married couple Emma and Julius Lewandowski (see biographies at www.stolpersteine-hamburg.de) at Hansastrasse 57.

The notarization of a Jever notary on 9 Feb. 1939 revealed that Julius Schwabe had to sell his property in Albani-/Grosse Burgstrasse to the dentist Adolf Gottfried Behrends of Jever. The necessary formalities were arranged by the auctioneer acting as a proxy in the absence of Julius Schwabe. We assume that the property was sold far below its value.

A few days earlier, the Chief Finance Administrator (Oberfinanzpräsident) had blocked the assets of Henny and Julius Schwabe by the "security order ("Sicherungsanordnung) issued on 4 Feb. 1939. At the same time, he approved the payment of outstanding claims by Landessparkasse Oldenburg, Oldenburgische Landessparkasse Jever, to two private individuals as well as to the Treuhand AG Oldenburg. In addition, Julius Schwabe was required to open a blocked account with the Neue Sparkasse Hamburg, in which the rest of the proceeds, less the "Reich flight tax ("Reichsfluchtsteuer) and the "levy on Jewish assets ("Judenvermögensabgabe), i.e., 4,544 RM (reichsmark), remained. Each month, the Schwabe couple was allowed to dispose of 600 RM to cover their living expenses. In Sept. 1939, they received another questionnaire from the foreign currency office of the Chief Finance Administrator to determine their financial situation. Instead of the original 600 RM, the foreign currency office approved only 340 RM per month, of which 60 RM were available for rent and 280 RM for living expenses. Henny Schwabe supported her sister Elise in Oldenburg with 40 RM per month. Whether she continued to help her sister financially, we do not know.

Only late, in the beginning of 1940, did Henny and Julius Schwabe decide to emigrate to the USA.

For this purpose, it was necessary to fill in an extensive questionnaire pertaining to personal data. From this, we learned that Julius Schwabes income in 1937 and 1938 was 1,500 RM each, 1,800 RM for 1939, and 622 RM in 1940. The assets of the couple amounted to 7,750 RM. This included a small amount from the estate of Henny Schwabes deceased mother Rosa. The financial situation of the Schwabes was tense. They had debts with four different people, amounting to 8,500 RM. The Chief Finance Administrator concluded from this that the claims of the creditors had been transferred to the German Reich, since Jews were no longer allowed to own any assets. Julius Schwabes last place of residence in Jever he indicated was the address that he had called home from the day of his birth until 1 Apr. 1937.

On 2 Dec. 1940, Julius Schwabe applied to the Chief Finance Administrator for foreign currency funds to pay for tickets to Yokohama/Japan. He asked to be allowed to pay them in reichsmark. After the responsible Hapag travel agency had already agreed to this, the foreign currency office refused on 5 Dec. 1940.

A further application was required for moving goods, clothing, utensils, etc. Here everything was listed neatly: whether the umbrella was a new purchase and if so, at what price it had been bought; however, if it was an old umbrella, the year of purchase had to be noted; this also applied to six dust cloths. After everything was noted on several pages, the expert, court bailiff Fuhrmann, checked the documents for completeness. At the same time, he looked at the moving goods and noted conspicuous features, such as "that everything was used, heavily worn out, and partly defective. The documents were presented to the Chief Finance Administrator, who gave his approval on 5 Sept. 1941. A handwritten note referred to the emigration for the months of Sept./Oct. 1941. We do not know why the emigration did not take place. Reasons could have been  due to the war  the lack of travel opportunities or the ban on emigration on 23 Oct. 1941.

On 25 Oct. 1941, the first deportation of Hamburg Jews, who lived in Hansastrasse and Brahmsallee, among other places, took place.

Julius Schwabe saw no way out of this situation. The neighbors, Julius Gröschler and Prof. Adler (see www.stolpersteine-hamburg.de), found the lifeless Julius Schwabe in the attic of the house on 28 Oct. 1941. The police were informed by telephone. The prosector (pathologist) Holzknecht called to the scene from the Harbor Hospital noted the death of Julius Schwabe. Since there was a farewell letter for Henny Schwabe in the apartment, the police assumed suicide. The reason for this was the impending "evacuation. The text of the letter was recorded in the minutes that we reproduce here with the permission from the relative Gideon Schmuel de Beer: "Beloved Mutti Herz [an endearing term for wife], Im up in the attic. Greetings to the children, Liese, Leni and children. Do turn on the gas, this is no life. Its better this way. I thank you dearly for all your love, I kiss you dearly, Papi [here, and endearing term for husband].

Now Henny Schwabe was on her own. She possibly received support from her sister Elise, who meanwhile lived with her family in Rothenbaumchaussee 217. In mid-Nov. 1941, Henny Schwabe received a letter from the Chief Finance Administrator, which was sent to her at Rothenbaumchaussee 213. According to this, she was allowed to dispose only of 250 RM a month to cover her living expenses. Henny Schwabe paid 200 RM for an eye operation of her nephew Claus Joseph in the Israelite Hospital on Johnsallee. The necessary permission from the Chief Finance Administrator of 30 June 1942 reached her it Beneckestrasse 6, a building that the Jewish Community used as a "Jews house ("Judenhaus).

Henny Schwabe was deported to Theresienstadt with Transport VI/1 on 15 July 1942 and from there with Transport Eo to the Auschwitz extermination camp on 6 Oct. 1944.

Hennys sister Elise (born in 1887), married in her second marriage to Siegfried Joseph (born in 1885), and the children born in this marriage, Hannelore (born in 1920) and Claus (born in 1925), were also expelled from Oldenburg. Karl Heinz and Herbert Stein, the sons of Elises first marriage to Levy Moses Stein (18661914), emigrated to the USA and Palestine in 1938 and 1935, respectively. Hannelore Josephs emigrated in 1939 via Sweden to Palestine, where she arrived in 1941.

From mid-1940, the Josephs family first lived in Rothenbaumchaussee 217, in 1942, they were accommodated in the house of the Jewish Community at Beneckestrase 6. With the transport on 15 July 1942, Elise, Siegfried, and Claus Josephs (see biographies at www.stolpersteine-hamburg.de) were deported to Theresienstadt and murdered in Auschwitz in 1944.

The younger sister Helene (18931942 in Auschwitz) had been married to the Dutchman Hermann de Levie (18901942 in Auschwitz) since 1914. They lived many decades in Oldenburg, where the two children Ruth (in 1915 in Tilburg/Netherlands 1975) and Hans-Ludwig (19181942 in Auschwitz) were born. Ruth and Hans-Ludwig emigrated to Groningen/Netherlands in 1933, their parents followed in 1935, later the family moved to Amsterdam and s-Hertogenbosch. From the Westerbork transit camp, Helene and Hermann de Levie were deported to Auschwitz on 30 Oct. 1942 with the 32nd transport. A few days later, on 10 Nov. 1942, Hans-Ludwig followed with the 35th transport. The destination was also Auschwitz. The family was murdered and later declared dead.

Daughter Ruth had married Robert van Oss (born in 1914 in Oisterwijk 1978) on 26 May 1940. After the couple had already been entered on the deportation list, they fled to Switzerland via Belgium and France in 1942. The authorities in Geneva registered Ruth and Robert van Oss as recognized refugees. Their daughter Marijke was born in Montreux in 1944.

After the war, the family returned to Holland. Marijkes brother Marcel was born in 1947 in Oisterwijk. Marijke Wagenaar, married since 1972, lives with her family (one son and one daughter) in the Netherlands. Marcel van Oss lives in Israel with his wife and two daughters.

In Oldenburg, the sisters of Henny Schwabe, Elise Josephs and Helene de Levie, as well as their families have not been forgotten. The Oldenburg Memorial Book commemorates them.
For their cooperation in this biography, we would like to thank very sincerely the de Beer, van Oss, and Wagenaar families, who supported us with valuable hints and details.