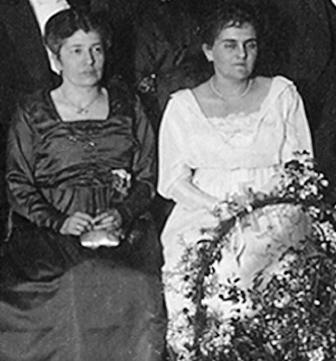 Martha Fürstenberg was married to the Russian master furrier Viktor-Hermann Fürstenberg. Her niece, Inge Hutton, remembers the visits at her aunt and uncles place: "Aunt Martha, she was such a cheerful little person. That was always grand at the time they still had the fur business on Lübecker Strasse  In the front was the store and to the back, there was such a long hallway where the furs would always hang; for children this was highly interesting, of course. Behind that were the living quarters, and we would visit them from time to time, when one of them had their birthday, he or she. We would go there with the parents in the afternoon and it was actually always very nice. Only thing was, they had a large, white grande poodle. He was very jealous and they always had to lock him away when we came. His name was Luki. He went mad when we two girls showed up, and he would have bitten us. So he was locked up and things were peaceful.

Inge Hutton is also able to recall the discussions between her father and her uncle, Viktor-Hermann Fürstenberg. Her uncle was a dedicated Communist and did not always encounter sympathy among the family with his political views. Jokingly, he was sometimes dubbed a "salon Bolshevist. His commitment to Communism and his Jewish descent got him into difficulties immediately after the change of power. Out of justified fear of persecution, he fled to the Soviet Union as early as 1933. Among his family, word was that likely he jumped out of the frying pan into the fire and was probably murdered by Stalins henchmen.

Because of her marriage to the Russian Fürstenberg, Martha was considered stateless. Along with her husband, she simultaneously lost her economic livelihood. The family of her sister, Clara Levy, took her into their house on Werderstrasse. Inge Hutton remembers that her aunt suffered very much due to the loss of her husband and desperately learned Russian, probably because she hoped to be able to follow him. After all, before his flight, he had promised her that he would get her to join him in the Soviet Union. In fact, she never saw him again.

In 1939, after her sister Clara Levy had also lost her husband and the house, the two women moved in as subtenants with the Tichauers, a Jewish dentists couple from Bergedorf, to Isestrasse 55. As late as one year afterward, the sisters still organized a wedding table for their brother Alfred Pein, Inge Huttons father, who was getting married a second time. To this end, the sisters had set a long table extending through two rooms for the wedding party and served coffee and cake.

In 1941, Martha Fürstenberg received the deportation order to Lodz by mail. Possibly, due to her status as a stateless person, she had been assigned to the very first transport on 25 Oct., whereas her sister Clara was deported to Riga only in Dec. In the Lodz Ghetto, Martha Fürstenberg was allocated living quarters at Alexanderhofstrasse 37.

On 9 May 1942, she wrote a letter to the "Office for Resettlement ("Amt für Aussiedlung), which is extant. In it, she asked for deferment from the imminent transport in May 1942. She enclosed a medical certificate confirming that she had to undergo an operation soon.

She was lucky, the application was decided in her favor. The official stamp on her petition read "UWZGLEDNIONE, which, translated from Polish, means "considered. Martha Fürstenberg survived for another two years at Alexanderhofstrasse and then again received a deportation order with "Transport 78 on 28 June 1944 to the Chelmno extermination camp. One must assume that 28 June 1944 is at the same time Martha Fürstenbergs date of death.